The term “startup” is used in various ways, and now is generally understood to refer to a technology-based company which aims to grow fast, disrupt current markets, and be funded by venture capital.

The lessons learned of the first wave of late 1990s startups was mainly recorded in blog posts and informal papers. In 2010, people such as Alexander Osterwalder, Ash Maurya, Eric Ries and Steve Blank started to publish books which gathered and structured this knowledge. Their work led to the Lean Startup and Customer Discovery methodologies which systematized how startups should approach the early stages of formation.

A seminal work by Max Marmer in 2011, the “Startup Genome Project” examined hundreds of startups at various stages, to profile a four-stage evolution for startups with important go/no go decisions at each stage: 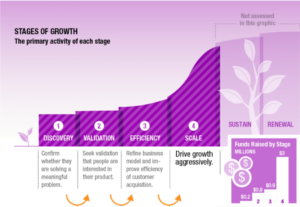 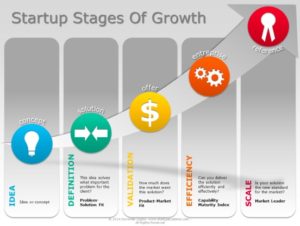 A specific finding from Marmer’s survey is that there are specific business model hypothesis which need to be validated before a startup moves into scaling mode, otherwise the startup fails – a phenomenon he called “Premature Scaling”. This was a revolutionary finding which has now become the basis of high-end acceleration programs.

TechCrunch’s article on Premature Scaling based on the Marmer report:
https://techcrunch.com/2011/09/01/a-deeper-look-at-blackboxs-data-on-startup-failure-and-its-top-cause-premature-scaling-infographic/

“BEYOND THERE BE DRAGONS”

What I find interesting from many of these frameworks is that they focus on the idea creation and validation stages, but then lump everything after initial go-to-market in a generic “Scaleup” step.

Marmer was explicit about excluding the scaling stage from his model, probably intending to extend his work later. Unfortunately, he never got around to it.

The main benefit of the startup frameworks is that they greatly lowered the risk and also the cost of the early phases of a startup. I believe that the systemization and standardization based on the two basic steps of seeking problem-solution fit and product-market fit have contributed to the proliferation of the startup support ecosystem.

It is time to do the same for the scaleup phase of high-performance entrepreneurship. By segmenting the “beyond there be dragons” world of scaleup into discernable phases with essential go-no go decision criteria, I am convinced we can better manage the risk of scaleup and improve its survival rate.